← back to
Chant Records
Get fresh music recommendations delivered to your inbox every Friday.
We've updated our Terms of Use. You can review the changes here.

Laugh and Lie Down

by Robert Dick and Dan Blake 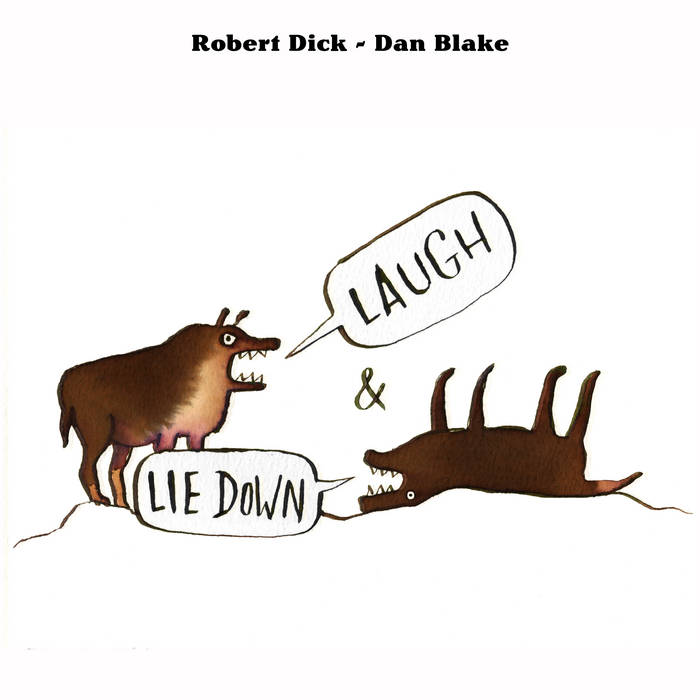 You might think that composition and improvisation are at opposite ends of the spectrum, or set apart by a fairly impermeable boundary, with composition as the product of a careful process that takes dozens of elements into account, and balances them consciously, with deliberation as an essential element, and improvisation as a performance art driven by the impulses of the moment, responses to the musical stimuli produced by other members of the improvising ensemble, and the creation of musical events that evoke responses from the other players.

It’s not that cut and dried, of course. Composed works are, at some point in their creation, improvisations, but with an extra step that involves a second (or two hundredth) look, and a good deal of tweaking and reconfiguring by the improviser/composer. And improvisation itself comes in several flavors. The musicians in a jazz ensemble, a rock group and an ensemble of Hindustani musicians may all improvise with complexity and invention, and sometimes at considerable length within the confines established by a song’s chord progression, or the melodic shape and rhythmic cycles of a raga.

The three substantial pieces on Laugh and Lie Down are free improvisations, not tethered to existing chord sequences, rhythmic ideas or any other preconceived forms, roadmaps, or even loose agreements between the two virtuoso players, the flutist Robert Dick and the saxophonist Dan Blake.

The works were recorded live, at a November 2019 concert at the Scholes Street Studio, in Brooklyn, and astonishingly, Robert and Dan had not played together since 2009, when Dan studied composition with Robert, and the two occasionally jammed. To the extent that they discussed what they would do during their improvised set, their conversations bypassed such commonplace practicalities as themes, riff, timbres, and rhythms, but instead touched on what Dan describes as “the dimensionality of the music, how musical dialogue flowed freely from accompaniment to leading, from synergistic playing to utter disparateness.”

There were no second takes, post-production touch-ups, fixes or editing: what you hear are the three works Robert and Dan played, as they played them.

“We just kind of showed up, shared a (pre-Covid) hug and caught up a bit, and then just dove into our shared improvisational language,” Dan recalls. “There are cues that one can give or receive, but they’re given spontaneously – there was certainly no discussion about what the cues are, in terms of where someone moves from the foreground to the background. I would describe it more as a set of reactions that I’ve personally cultivated. And I knew Robert’s playing well from when I studied with him; those were formative years for me, and I feel a great affinity for Robert’s playing and his approach, and his attitude about exploring and exploding limits. So yes, there was this interregnum, but I’ve always thought about getting into a space with Robert to explore the unfinished business we had as collaborators. And I think our ideas about cues and existing in a space together were all agreed upon wordlessly.”

That wordless agreement was, in a way, an approach that Robert dates back to a concert he once played with a sitarist. “He stressed how important it was just to sit together and have some tea, and just be with each other” the flutist explained. “And that was all the rehearsal we were going to need. We weren’t playing classical ragas, so he was taking as much a chance as everyone else. And he was right. Having a sense of the person can be very helpful.”

The result, on Laugh and Lie Down is stunning for the depth of the musicianship and sheer inventiveness on display: you hear dialogues and counterpoint, agreement, demurral and persuasion, close mirroring and sharp contrast, and of course, the full arsenal of timbres you would expect from each of these players – Robert’s trademark ascending and descending glissandi and key-percussion, offset by stretches of smooth, warm flute tone; Dan’s alternation of a mellow sax sound and brash, assertive bursts, and the breath effects, multiphonics, circular breathing, and other extended techniques that both musicians share.

There are moments when Robert and Dan play not only on their instruments, but on the acoustics of the room, creating the impression that there are three or four independent lines of music, even though the listener knows for certain that there are only the two of them playing. And there are times when the difference between the flute and saxophone seem almost to melt away – when Robert and Dan approximate each other’s timbres so closely, despite the differences the way sound is produced on flutes and reeds, that instruments and players seem to merge into a single, polyphonic wind instrument.

“You know,” Robert says, “the approach to instrumental virtuosity has very much evolved in the timbral world, and what players are doing now is so much less restricted, in its conceptual framework. I always kind of feel sorry for flute players who can only make their instrument sound like a flute. And I think that has a lot to do with the influence of electronic music and rock guitar, for which the importance of sonority is huge.”

To which Dan adds: “One of the benefits of playing spontaneously,” Dan observes, “is to be able to shape shift in the moment, and maybe make decisions that would be hard to communicate, as a composer to other players. There are ways to tell a saxophone player to meld into the sound of the flute, and maybe there are ways to engineer that by trying things out in rehearsal. But in this situation, I think it’s one of the strengths of the spontaneous format.”

What that spontaneity yielded, though, is music that has the logic, the sense of structure and the immersiveness of a carefully composed, repeatable work, perhaps one that could become a pillar of the contemporary duo repertory. Perhaps that can be ascribed to the fact that both players are also composers. But in fact, neither of them seemed interested in transforming their improvisations into a repeatable piece.

It is impossible to describe the three pieces without lapsing into imagery that undoubtedly has more to do with the listener’s frame of reference and state of mind than that of the musicians. In the 27 minute title work, for example, a long, chromatic dance between the flute and sax builds toward what can seem like an otherworldly junglescape, with colorful coos, roars, gabbling and shrieks. That atmosphere comes and goes during the second half of the piece, yet there are also urbane, noirish episodes, with hints of jazz-tinged, ballad-like melody on the saxophone, and fluid angularity from the flute. “Red Corner,” by contrast, evokes the quality of exotic sci-fi, as if it were a scene from a space opera, and in “500 Forks,” the dialogue between the flute and the sax has a competitive edge, as if the players were vying to see who could make his instrument’s sound morph into the most distant possible timbres.

Neither musician has hinted at what he had in mind during the performance, but Robert pointed out that “Dan and I both feel that the titles are important in that they give the listener some sort of handle on where or how to listen. I’ve always thought that ‘Two Pieces for Flute and Saxophone’ or ‘Stück,’ or the like, are just cop-outs.”

But don’t take them too literally. “Laugh and Lie Down” was taken from English As She Is Spoke, a book of Portuguese-English dialogues by authors (Pedro Carolinho and José da Fonseca) who didn’t actually speak English. “Red Corner,” Robert says, may have been the title of a painting, or just a phrase he added to his ongoing collection of potential work titles – but in any case captured what he described as “the red vitality” of the piece. “500 Forks” has a couple of meanings, the most relevant of which, according to Robert, is “moving through a maze at high speed together with Dan.” He adds, however, that it also evokes a trip he once made to a Goodwill shop in Buffalo, New York, where he was searching for silverware to make wind chimes, selecting forks, knives and spoons but tossing them in the air (holding them would have damped their sound) and striking them as they fell, to determine which had the best sound.

All told, the collaboration put Robert in mind of the spiritual journey described in Carlos Castaneda’s Don Juan trilogy. “The connection,” he said, “is that improvising is entirely experienced as total involvement in the moment, with no division of the mind into multitasking, with one part doing, another part analyzing and a third part recording. When we finished the concert, I knew we had gone deep into our music, but I couldn’t remember much in any detail: I learned what had happened by listening to the recording. In Castaneda’s work with Don Juan, training to become a sorcerer, there was a similar process. After lessons and preparation, he took a huge leap into the unknown, followed by an extended period of gradually recovering the memory of what had taken place.

“In the end, good music is good music. It might be painstakingly composed through a tortoise-paced, angst-ridden process – or it might be played spontaneously, which is a very joyous process. But in the end, if it’s good, it’s going to have the qualities of good music, no matter how it was created.”

Robert Dick playing solo has been likened to the experience of hearing a full orchestra. His flute a human powered synthesizer whose sound can be thick chords one instant, then chromatic percussion, then delicate whispering or a display of surprising power. He’s collaborated with improvisors from over the world and has performed and recorded with an extraordinary array of musical personalities. ... more

Bandcamp Daily  your guide to the world of Bandcamp